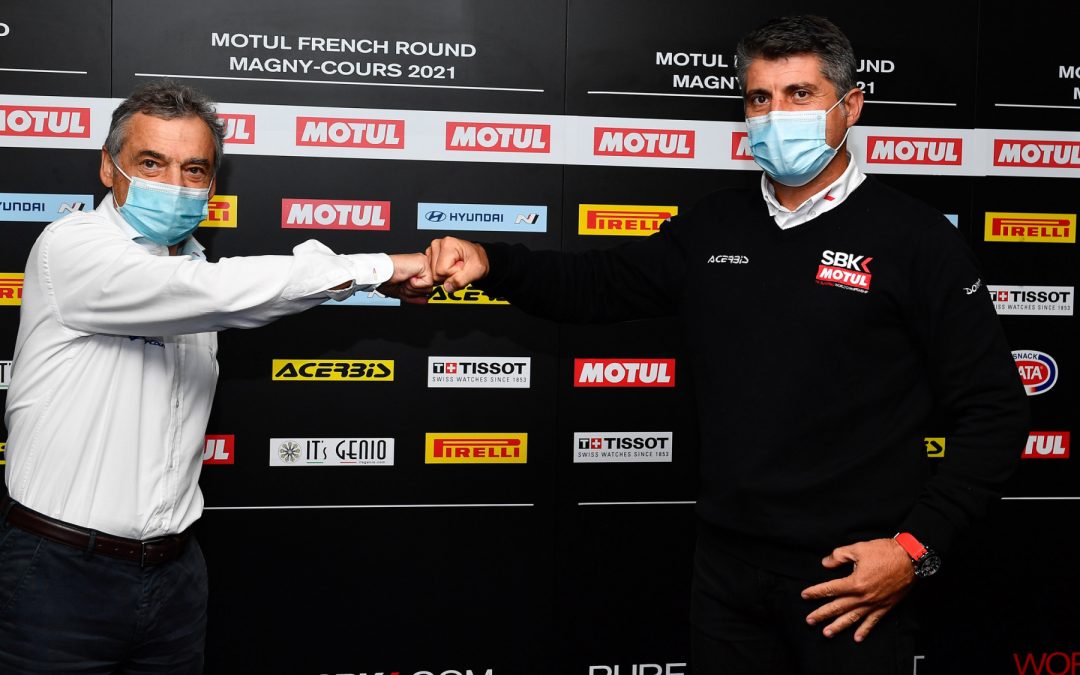 A new contract extension ensures the Circuit de Nevers Magny-Cours remains on the SBK® calendar until 2024.

The contract extension to keep Magny-Cours on the MOTUL FIM Superbike World Championship calendar until 2024 was announced during the 2021 edition of the Motul French Round by Serge Saulnier, director of the Circuit de Nevers Magny-Cours, and Gregorio Lavilla, WorldSBK Executive Director.

France has a rich history with two WorldSBK Champions, Raymond Roche in 1990 and Sylvain Guintoli in 2014, while Sebastien Charpentier, Stephane Chambon, Fabien Foret and Lucas Mahias, who now competes in WorldSBK, all claimed titles in WorldSSP. French teams are also involved in the Championship with GMT94 Yamaha in WorldSSP team and the Leader Team Flembbo outfit in WorldSSP300.

The French circuit has hosted 40 WorldSBK races, the first one back in 1991, and has been on the Championship’s calendar since 2003, becoming an emblematic event, often playing host to title-deciding moments. 2021’s event will mark 30 years since WorldSBK first visited the iconic circuit, thus making the contract extension a fitting celebration of the long, successful partnership. The French Round has always offered exciting races to thousands of WorldSBK fans attending the event, whilst the event has become one of the pillars of the calendar and a spectacular showcase for all involved.

Serge Saulnier, Chairman of the Board, Circuit de Nevers Magny-Cours:

“The difficult period we have just experienced in the last 12 months helped to strengthen the ties and relationship between Dorna’s and Circuit de Nevers Magny-Cours’ teams. Thanks to this and the prospects in WorldSBK, we are happy and proud to extend our contract until 2024.”

“We are delighted to have reached this contract extension with the Circuit de Nevers Magny-Cours. The French track is one of the key rounds of the WorldSBK calendar. The circuit always provides exciting racing and action including hosting some incredible title-deciding rounds in all three classes. We look forward to continuing to work with the circuit to keep building on a popular event.”