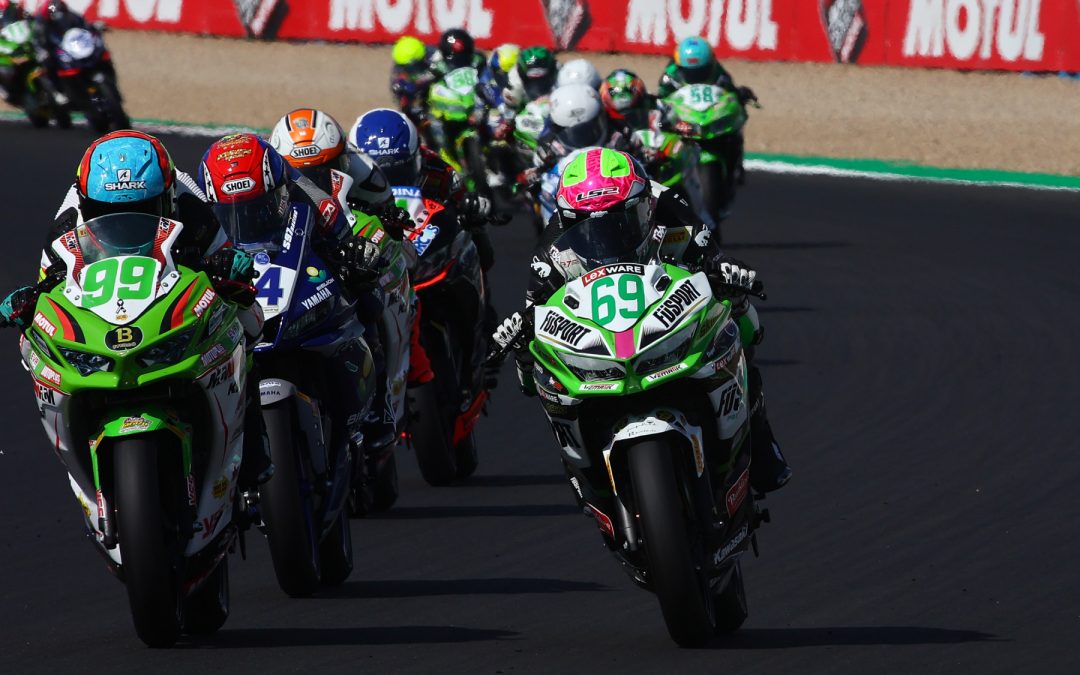 The final race of the Motul French Round in the FIM Supersport 300 World Championship was a typically enthralling encounter as Spanish rider Adrian Huertas (MTM Kawasaki) claimed his second victory of the weekend after a race-long battle with his rivals at the Circuit de Nevers Magny-Cours, as he beat title contender Tom Booth-Amos (Fusport – RT Motorsports by SKM – Kawasaki) by less than half a second.

Huertas and Championship contender Booth-Amos have been inseparable in the title battle and that continued on track in the 13-lap Race 2 encounter with just three tenths separating the pair at the end of the race, with Spanish rider Huertas extending his lead in the Championship standings with victory.

The pair had been battling it out in the traditional lead group but were able to hold the lead despite pressure from behind, with reigning Champion Jeffrey Buis (MTM Kawasaki) claiming third place just one tenth behind Booth-Amos, as well as finishing half-a-second clear of Dean Berta Viñales (Viñales Racing Team) in fourth.

Viñales has endured a tricky season in his first campaign in WorldSSP300 but the French Round could have provided a breakthrough for the 15-year-old Spaniard, having taken in his first point in Race 1 on Saturday he was challenging in the lead group and took the lead of the race on the penultimate lap. He fell down to fourth in the closing stages of the race, but still claimed his best result in his career.

He finished ahead of Yuta Okaya (MTM Kawasaki) by around a tenth after a strong ride for the Japanese competitor in fifth place. Italian Gabriele Mastroluca (ProGP Racing) claimed sixth place after a strong weekend for Mastroluca, while Yeray Ruiz (Yamaha MS Racing) was seventh in his debut WorldSSP Round. Inigo Iglesias (SMW Racing) claimed eighth place while South African rider Dorren Loureiro (Fusport – RT Motorsports by SKM – Kawasaki) was ninth and Daniel Mogeda (Team#109 Kawasaki) rounding out the top ten.

COMPLETING THE POINTS AND JUST MISSING OUT…

2018 Champion Ana Carrasco (Kawasaki Provec WorldSSP300) was 11th after fighting her way through the field while Samuel Di Sora (Leader Team Flembbo) claimed 12th place. Victor Steeman (Freudenberg KTM WorldSSP Team), the sole KTM rider in the field, was 13th with Mirko Gennai (Team BRcorse) and Marc Garcia (Prodina Team WorldSSP300) rounding out the points; Garcia back in the points on his return to the Championship.

Dutch rider Ruben Bijman (Machado CAME SBK) missed out on a points finish by just a tenth of a second as he came home in 16th place, ahead of Kevin Sabatucci (Kawasaki GP Project) in 17th; the Italian started from the pit lane after an infringement of the engine allocation regulations. Petr Svoboda (WRP Wepol Racing) was 18th with Alessandro Zanca (Kawasaki GP Project) and teammate Alejandro Carrion completing the top 20.

Harry Khouri (Fusport – RT Motorsports by SKM – Kawasaki) was the first retirement of the race after he crashed on the exit of Turn 13 and was unable to re-join the race, while Margo Gaggi (Biblion Yamaha Motoxracing) suffered a highside crash at Turn 3 on Lap 4. On the same lap, Dutch rider Koen Meuffels (MTM Kawasaki) crashed at Turn 5 which forced him out of the race, while Meikon Kawakami (AD78 Team Brasil by MS Racing) pulled into the pits in the early stages with a technical issue. Hugo de Cancellis (Prodina Team WoroldSSP) was running the lead group but had to retire when he had an issue with his chain on Lap 6.

Jose Luis Perez Gonzalez (Accolade Smrz Racing) had an eventful Race 2 with the Spanish rider given a double Long Lap Penalty for irresponsible riding that led to a collision in the Warm-Up session. After taking one of the Long Lap Penalties, he was given a ride-through penalty but was forced to retire from the race after a crash at Turn 17. Vicente Perez Selfa (Machado CAME SBK) had a technical issue in the closing stages of the race, as did Ton Kawakami (AD78 Team Brasil by MS Racing). Bahattin Sofuoglu’s (Biblion Yamaha Motoxracing) race came to a premature end on Lap 12 after he made contact with the back of Booth-Amos, the incident forcing the Turkish rider out of the contest when fighting in the lead group.