Heading to Nièvre for the French FFSA GT Championship 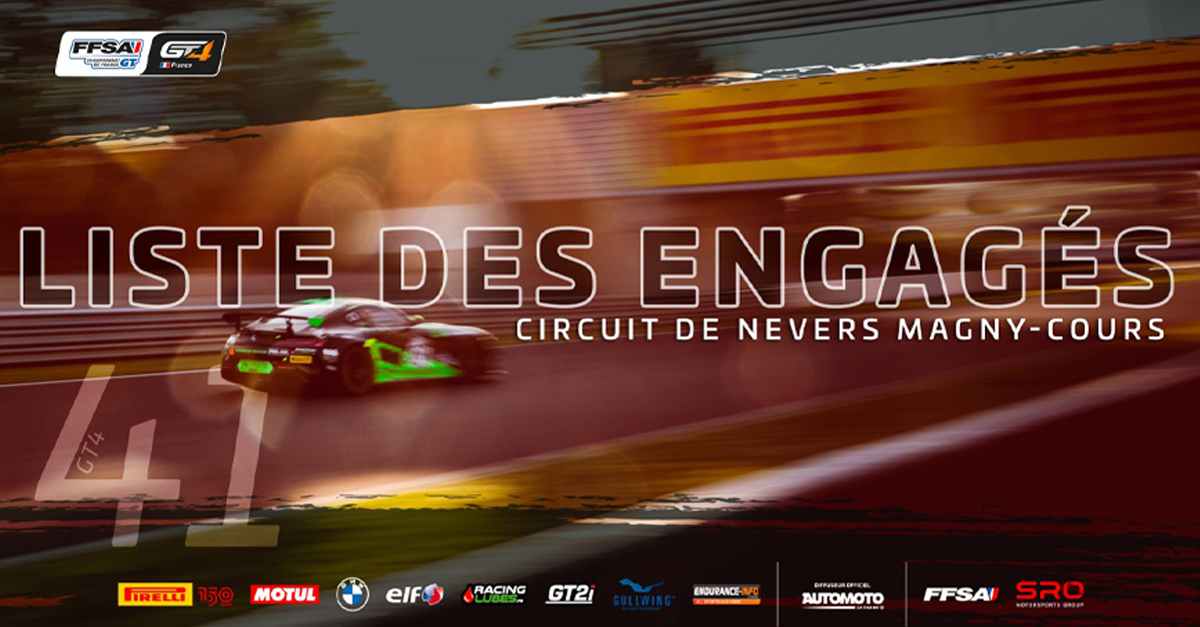 Four weeks after a very successful debut at Nogaro, the FFSA GT Championship will have its second meeting at the Circuit de Magny-Cours. The Nivernais track, a major venue for French motorsport, will offer a real motorsport festival on May 13, 14 and 15. The FFSA GT will share the bill with the Fanatec GT World Challenge Europe powered by AWS (the reference competition for GT3 in Europe, which hosts Valentino Rossi) as well as renowned series such as the FFSA Formula 4 Championship, the FFSA Tourism Championship, the Porsche Carrera Cup France, the Alpine Elf Europa Cup, the Clio Cup Series or the Mitjet International.

With a first race of 60 minutes at night on Saturday (start at 9:55 pm) and a more traditional race on Sunday at midday (12:10 am), the program is appetizing for the competitors of the French Championship FFSA GT. Between the Nogaro revenants and those who want to continue their good momentum of the Easter Cup, the debates promise to be animated for the 41 GT4 engaged on this event!

Pro-Am: a Porsche in the lead!

We might as well admit it, it’s been a long time since we’ve seen a Porsche leading the Pro-Am championship! In fact, the last victory of the German brand in the category dates back to 2019, on the circuit of Pau. But by winning the second race at Nogaro, Julien Piguet and Alban Varutti (Porsche 718 Cayman GT4 RS Clubsport #10 – AVR Avvatar) gave it back a certain nobility on French soil. Will they be able to continue on this same path at Magny-Cours? Nothing is less certain, as the profile of the track is very different from that of Nogaro.

If we look at the provisional standings, the top 5 represent five different manufacturers. With Arno Santamato and Rodolphe Wallgren (entered by the new CSA Racing team), we find an Audi in second place ahead of an Alpine (Nicolas Prost and Rudy Servol on an A110 of the CMR team), a Mercedes-AMG (Jim Pla and Fabien Barthez, with Akkodis ASP) and an Aston Martin Vantage (Sandro Perissoutti and Ronald Basso, representatives of the Spirit of Léman Racing).

We will also note the arrival in the Pro-Am of a Mercedes-AMG GT4 of the Spanish team NM Racing. David Levy will be at the wheel of this car, who had been convincing – but unlucky – for his debut in the championship at Nogaro with the Ginetta of the Speedcar team. This time, he will be associated with Paul-Adrien Pallot, last year’s Mitjet International Junior Champion (and 3rd overall). At 17 years of age, this is another young talent who intends to take advantage of the FFSA GT to make his mark!

Winners of the second race at Nogaro, Hugo Chevalier and Enzo Joulié (Mercedes-AMG GT4 #87 – Akkodis ASP) took the lead in the Silver Cup before arriving at Magny-Cours. The two youngsters were among the favourites even before the season kicked off and they are determined to make their mark in the Nièvre.

Their closest rivals at the moment, Erwan Bastard and Roee Meyuhas, have created a small surprise. Not that we doubt the potential of the Saintéloc Junior Team pair, but the Frenchman is discovering the Audi R8 LMS GT4, while the Israeli-American is making his debut in the French Championship. Boosted by their success in Race 1 of the Easter Cup, they are hungry for more success.

However, the gaps are very small in the provisional standings with Thomas Drouet and Paul Evrard (#88 Mercedes-AMG GT4 – Akkodis ASP) just eight points behind the leaders, as are Stéphane Tribaudini and Stéphane Lémeret, who should find Magny-Cours a more suitable playing field for their CMR team Toyota GR Supra GT4. The same goes for the 2020 Silver Cup champions Benjamin Lessennes and Ricardo van der Ende. The BMW M4 GT4’s have often proved to be formidable on this fast circuit and the Belgian-Dutch team knows that they have to fight back to stay in the title race.

Among those who are eager for revenge, we find Lonni Martins and Sacha Bottemanne (Audi R8 LMS GT4 #6 – Team Fullmotorsport), who won the category a year ago and who must open their counter after a nightmarish weekend in Nogaro. On another Audi, aligned by CSA Racing, it will also be necessary to follow the pair Gaël Castelli-Alexandre Cougnaud. Finally, the public will be watching closely the performance of Anthony Beltoise, poleman and overall winner last year. Now partnered with Grégoire Demoustier in an Alpine A110 GT4 from the Bodemer Auto team, the multiple French Champion could find his way back to the podium.

Am Cup: the revenge of the champions?

The Easter Cup at Nogaro delivered a rather unexpected first result in the Am Cup. Of course, seeing the 2021 vice-champions in the lead is not a huge surprise. Laurent Coubard and Jean-Charles Rédélé drove a near-perfect weekend in their Bodemer Auto Alpine at Nogaro. On the other hand, the brothers Pierre-Arnaud and Jean-Laurent Navarro were less expected to be at the party. Discovering this season the Alpine A110 GT4 of JSB Competition, the two Montpellier inhabitants won the first race and are now serious outsiders, as are the beginners Florent Grizaud and Kevin Jimenez, who did not miss their entry with the Aston Martin Vantage AMR GT4 of GPA Racing.

And the champions in all this? Very fast in the Audi R8 LMS GT4 of Team Fullmotorsport, Christophe Hamon and his new teammate – in France at least – Michael Blanchemain suffered at the end of the race. Only fourth in the overall standings, those who had won the Am Cup of the GT4 European Series in 2021 hope to prove at Magny-Cours that they are still the favorites of the championship.

There will be an intense battle in all three categories during the two 60-minute races with driver changes. As always, the races will be broadcast live – and completely free of charge – on the GTWorld YouTube channel and on the championship’s social networks.

In addition, Automoto la chaîne will broadcast the first race live on its airwaves as part of a super evening that will also include the French FFSA Tourisme Championship and the Fanatec GT World Challenge Europe powered by AWS. The second race will also be available on the social networks of Automoto la chaine. Tickets are currently on sale on the Circuit de Magny-Cours website and will also be available at the ticket offices at the entrance of the site. So there is no reason not to enjoy this festival of motorsport with a blue-white-red touch!

TICKETS
© Circuit de Nevers Magny-Cours 2016 - Création : agence itiConseil
We use cookies on our website to provide you with the most relevant experience by remembering your preferences and repeating your visits. By clicking on "Accept all", you consent to the use of ALL cookies. However, you can visit “Cookie Settings” to provide controlled consent.
Cookie settingsAccept
Manage consent