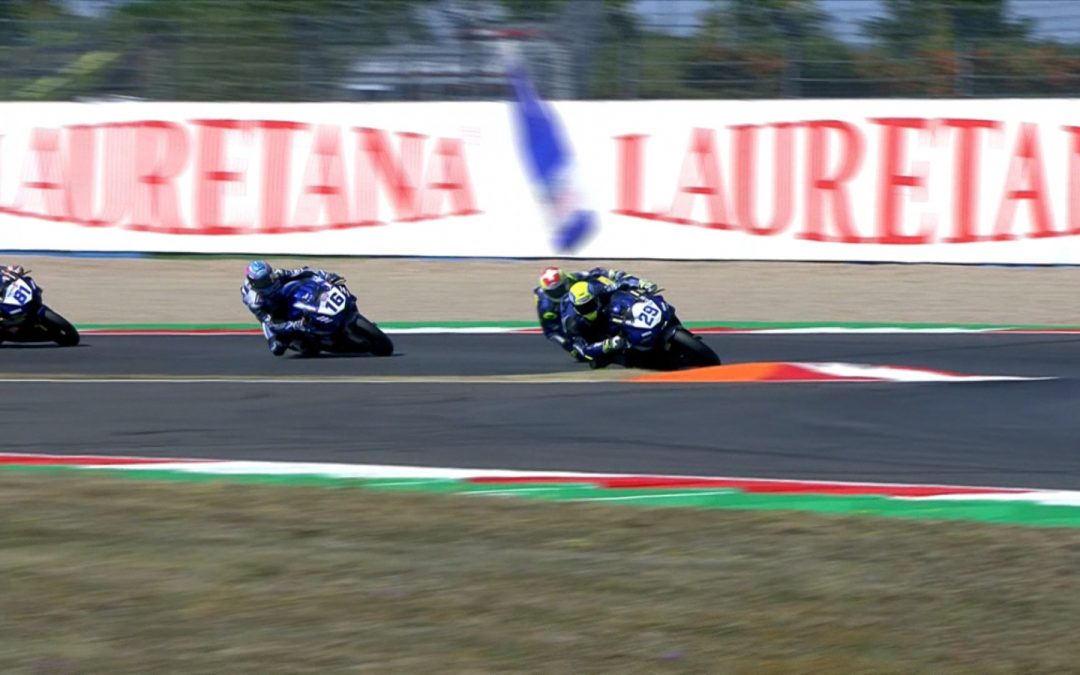 The Sammarinese rider crashed as he made a move for the lead of the race on the opening lap but fell at the final chicane, while Cluzel was involved in the crash

The final race of the FIM Supersport World Championship’s visit to the Circuit de Nevers Magny-Cours for the Motul French Round was dramatically Red Flagged on the opening lap of the race when Luca Bernardi (CM Racing) came off his bike at the Lycee Complex at the front of the field with the incident involving Jules Cluzel (GMT94 Yamaha) and Dominique Aegerter (Ten Kate Racing Yamaha).

Bernardi started the race from pole position but fell behind Aegerter, before looking to re-take the lead on the entry to the Lycee Complex, the tight chicane that ends the lap. Bernardi lost the front of his bike and went across the runoff, back onto the track and was hit by Aegerter, whole Cluzel was also involved in the crash.

CM Racing provided an update on Bernardi following the crash, confirming the Sammarinese rider was diagnosed with a fracture to the T12 vertebra. The extent of the fracture will be analysed in tests scheduled at the hospital in Nevers which will reveal the full scale of the injuries and provide both Bernardi and CM Racing with the next medical steps and recovery period.

Manuel Cappelletti, Team Director at CM Racing, said: “Obviously the result of the race doesn’t count for anything at the moment, given the injury Luca sustained in the crash. The fact that he has remained conscious and is moving all his limbs is the first sigh of relief: now we have to wait for the medical tests to understand the precise extent of the injury. It’s a great pity, as Luca was ready to play for the podium and was in great shape.”

GMT94 Yamaha also provided an update on Cluzel, who was taken to the medical centre following the crash before, like Bernardi, being taken to Nevers Hospital for further assessment. A statement on the GMT94 Yamaha website said: “After a very good start, Jules Cluzel would conclude the first lap in third place before Luca Bernardi lost the front in the last corner. It was then impossible for Dominique Aegerter and Jules Cluzel to avoid the San Marino rider. Aegerter was able to leave immediately, but Jules Cluzel suffered a head trauma without a fracture, unlike Luca Bernardi, who was injured in the back.

The GMT94 team is wholeheartedly with Jules and Luca. We wish them a speedy recovery. The two pilots are currently at the Nevers hospital for further analysis.”