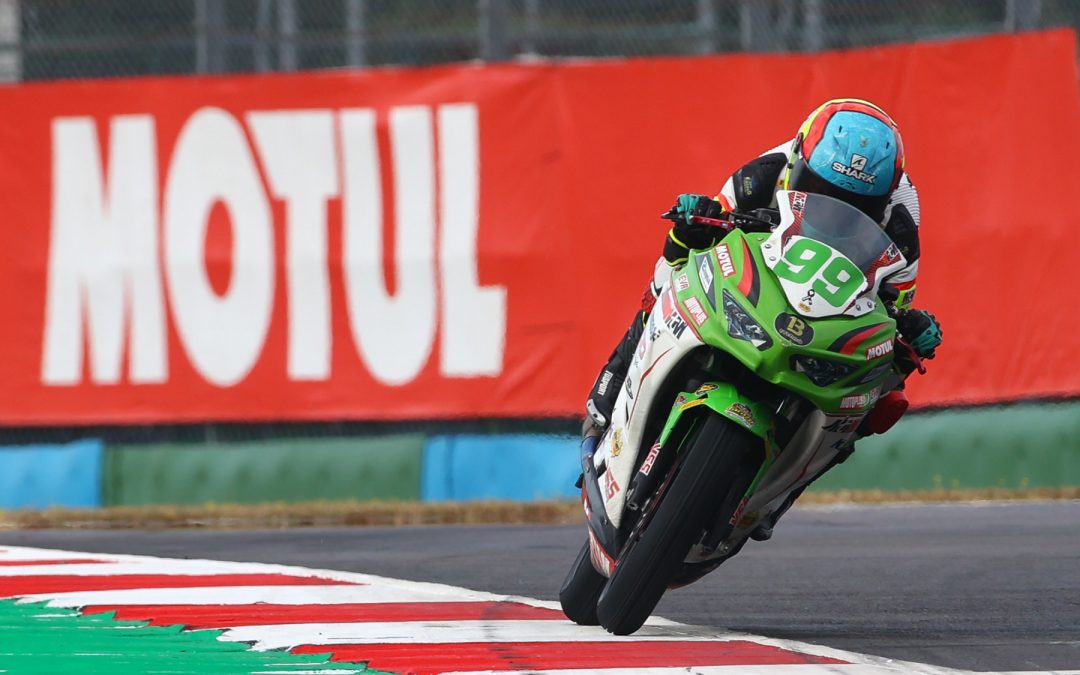 It was a Spanish 1-2 at the front, with Huertas leading Jose Luis Perez Gonzalez

The 2021 FIM Supersport 300 World Championship hit the Circuit de Nevers Magny-Cours for the Motul French Round on Friday morning in treacherous conditions. A rain shower had left the circuit wet, although the rain wasn’t falling. With times improving constantly throughout the session, it was Adrian Huertas (MTM Kawasaki) who grabbed the advantage early in the morning, setting a 2’03.770, over a tenth clear of his rivals.

Leading the way after the opening session, Huertas got down to a good time with him being in the 2’03 bracket. The Championship leader stamped his authority going into the remainder of the weekend, resisting a late charge from fellow countryman Jose Luis Perez Gonzalez (Accolade Smrz Racing), whilst Most race winner Victor Steeman (Freudenberg KTM WorldSSP Team) completed the top three. Another Most race winner in Jeffrey Buis (MTM Kawasaki) came home in fourth as the defending Champion continued his strong form, ahead of Inigo Iglesias (SMW Racing) who was fifth.

In the opening minutes, Bahattin Sofuoflu (Biblion Yamaha Motoxracing) highsided out of the last corner, although the Turkish ace was OK as he remounted. Sylvain Markarian (Leader Team Flembbo) was another crasher, but he made it back to the pits to go out again, whilst Vincente Perez Selfa (Machado CAME SBK) suffered a technical issue. Filippo Maria Palazzi (ProGP Racing) crashed in the second half of the session, with Alejandro Carrion (Kawasaki GP Project) having to take avoiding action at the Nurburgring chicane. Antonio Frappola (Chiodo Moto Racing) also crashed and rejoined, this time at Turn 13. With just over a minute to go, Dutchman Koen Meuffels (MTM Kawasaki) suffered a nasty highside out of the final corner but was thankfully up on his feet.