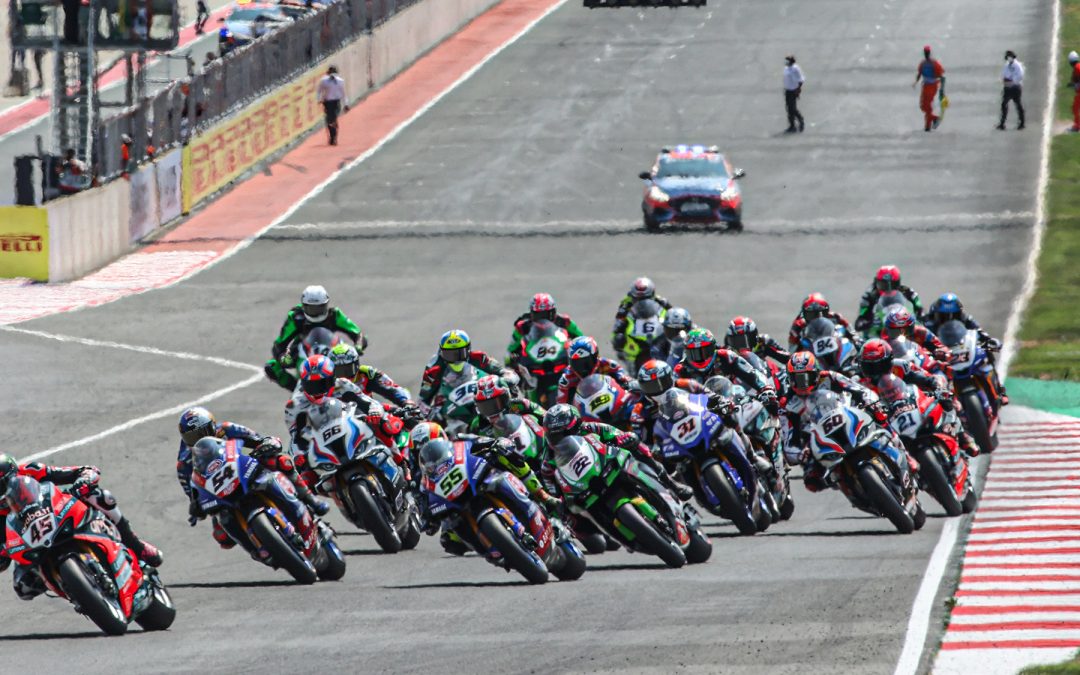 Level on points heading to Magny-Cours, the top two in the Championship are set for another showdown…

The 2021 MOTUL FIM Superbike World Championship is into the second half of the year and heads to the iconic Circuit de Nevers Magny-Cours for round eight and the Motul French Round. Usually, there’s a Championship on the line but not this time and in fact, the title race couldn’t be any different. It’s all square between Championship leader Toprak Razgatlioglu (Pata Yamaha with Brixx WorldSBK) and Jonathan Rea (Kawasaki Racing Team WorldSBK), as both have 311 points each – Toprak leading the standings by virtue of more full-length race wins (5 vs 4). However, with Scott Redding (Aruba.it Racing – Ducati) making big gains in the last two rounds, it’s a three-horse race.

NOTHING BETWEEN THEM: Razgatlioglu and Rea are neck and neck

For the first time in WorldSBK history after 21 races, the top two in the Championship are level on points and we’re heading to a track that Razgatlioglu relishes. He took his first ever win at Magny-Cours back in 2014 in the STK600 class, of which he’d be Champion in 2015. Then, he took a first STK1000 podium there in 2016 with second, before in 2019, his first WorldSBK win in a final lap shoot-out with Jonathan Rea came from 16th on the grid. He doubled up in the Superpole Race but with it being wet in 2020, he’s yet to show his strengths at the track on a Yamaha. Teammate Andrea Locatelli hopes be back on the podium, having established himself as a solid front-runner. He took a WorldSSP win at Magny-Cours in 2020, can he convert that into strong pace in WorldSBK though?

However, if Toprak’s ready for the challenge then so is his title rival Jonathan Rea – he’s won eight races at Magny-Cours, all of them for Kawasaki and apart from 2016, it has been every year. Add on to that the fact he’s been on the podium in all but one race at Magny-Cours on a Kawasaki (Race 2, 2017), then you’d be hard-pushed to find someone with a better track record. However, Rea’s coming into France on the backfoot, having relinquished his Championship lead and, in the last six races, handed 37 points to Razgatlioglu. Both enjoy the track and have already had final lap battles there before. Rea’s teammate Alex Lowes aims to fight for the podium despite a persistent injury, but he was on the podium twice at Magny-Cours for Kawasaki in 2020, so the pace is there.

EYES ON THE PRIZE: Redding and Ducati are back in the race

Edging closer with each round is Scott Redding, as the Ducati star is now 38 points behind the top two in the title race, having been 81 back just six races ago. Redding’s been in top form lately; seven straight podiums and all of them within the top two positions. It’s a devastating run of form which neither Razgatlioglu nor Rea have matched so far this year. Redding’s in the best form of his career and with a win at Magny-Cours in 2020 to keep his title hopes alive, he’s one of the favourites. In stark contrast, teammate Michael Ruben Rinaldi had a subdued weekend at Navarra where he took 15 points, but a return to the top six will be welcome at Magny-Cours, as he did in 2020.

It was an impressive weekend for BMW at Navarra, as they seemingly found form in the hotter conditions in comparison to where they had come from in the past couple of seasons. Tom Sykes (BMW Motorrad WorldSBK Team) achieved his tenth front row for BMW at Navarra and capitalised on that with two top six finishes in Race 1 and the Superpole Race, before taking fifth in Race 2. He was on the front row at Magny-Cours in 2020 as part of BMW’s first ever Superpole 1-2, when Eugene Laverty took pole. On the other side of the garage, Michael van der Mark didn’t have the same weekend as Sykes, with seventh, eighth and ninth being the Dutchman’s results at Navarra. However, six Magny-Cours podiums could propel van der Mark back to the sharp end.

Over at Honda, it was another difficult round endured by Team HRC as Alvaro Bautista and Leon Haslam worked hard to break into the top ten once again. For Bautista, there was just one point-scoring ride across the weekend with eighth in Race 2, whilst Leon Haslam’s only points came in Race 1 with 13th. Both lie outside the top ten in the Championship but could break into it it this weekend, with Bautista level on points with ex-teammate Chaz Davies (Team GoEleven). However, with no top ten coming in the wet of Magny-Cours in 2020, both Bautista and Haslam aim to get back into the fight for the leading positions in France.

THE INDEPENDENTS: tightening at the top

The Independent battle is as fierce as ever and whilst Garrett Gerloff (GRT Yamaha WorldSBK Team) has taken a slight dip in form across the last two rounds, he’s comfortably clear of the next-best Independent rider Chaz Davies by 43 points. However, closing in on Davies is Axel Bassani (Motocorsa Racing), who is now just five points behind the Brit and has leapfrogged Leon Haslam in the standings. For Gerloff, he was fast in the rain of Magny-Cours in 2020, whilst Chaz Davies took a double win back in 2016 and won again in 2017. Axel Bassani’s form is somewhat unknown in WorldSBK, but back in World Supersport, he took his best ever finish with fourth in 2016.

The rest of the Independent battle is being fought further down, with Lucas Mahias (Kawasaki Puccetti Racing) in 14th place, but going to his home-round full of confidence after two wins in the last three races held at the track in WorldSSP. Tito Rabat (Barni Racing Team) tackles Magny-Cours for the first time and is three points behind Mahias, whilst Yamaha’s Kohta Nozane (GRT Yamaha WorldSBK Team) will also go to Magny-Cours for the first time, after what seemed like a bit of a breakthrough at Navarra.

Isaac Viñales (ORELAC Racing VerdNatura) returns to action after a positive COVID-19 test prior to Navarra, with Jonas Folger (Bonovo MGM Racing) next up, just five points back. Christophe Ponsson (Gil Motor Sport Yamaha) heads for his home round and will hope to impress, whilst Leandro Mercado (MIE Racing Honda Team) aims for points once more. Loris Cresson (OUTDO TPR Team Pedercini Racing) and teammate Jayson Uribe also aim for points, particularly Uribe who is yet to score. Eugene Laverty (RC Squadra Corse) is on the entry list, but he will not be present on track.