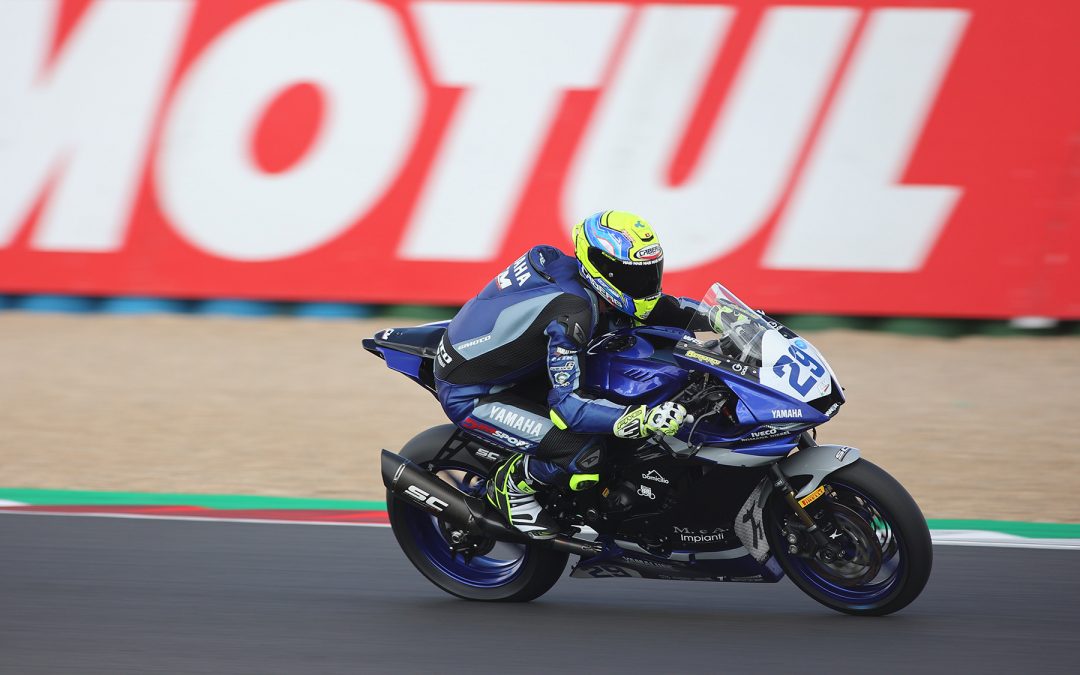 History was made in the FIM Supersport World Championship as Luca Bernardi (CM Racing) claimed his maiden pole position in Tissot Superpole for the Motul French Round, becoming the first Sammarinese rider to take pole position in WorldSSP after smashing the previous all-time circuit record by a tenth of a second at the Circuit de Nevers Magny-Cours.

Bernardi’s last lap was the lap that secured pole position at Magny-Cours as he posted a lap time of 1’40.330s, beating the previous all-time lap record by one tenth to take his maiden pole position, and also the third-youngest polesitter in WorldSSP. Bernardi will be joined on the front row by Championship leader Dominique Aegerter (Ten Kate Racing Yamaha), who was around one tenth behind Bernardi. Finnish rider Niki Tuuli (MV Agusta Corse Clienti) will line up on the front row alongside Bernardi and Aegerger after a strong performance, finishing 0.006s clear of Valentine Debise (GMT94 Yamaha).

THE REST OF THE TOP TEN

Manuel Gonzalez (Yamaha ParkinGo Team) was fifth on his return from an injury sustained at the Navarra Round, while Jules Cluzel (GMT94 Yamaha) was the second of three GMT94 Yamaha riders on the grid with sixth. Kevin Manfredi (Altogo Racing Team) took his best Superpole result of the 2021 campaign, and his career, with seventh and will lead away the third row of the grid.

Federico Caricasulo (Biblion Iberica Yamaha Motoxracing), who was the previous lap record holder before Bernardi, will line up from eighth ahead of Philipp Oettl (Kawasaki Puccetti Racing); the German rider crashing in the closing stages of the session at the Turn 5 Adelaide hairpin. Andy Verdoïa (GMT94 Yamaha) will start from 10th after a strong return to WorldSSP for the Championship’s youngest ever race winner.

Turkish star Can Öncü (Kawasaki Puccetti Racing) will start from 11th place with WorldSSP debutant Unai Orradre (Yamaha MS Racing) in 12th; Orradre stepping up to WorldSSP for the remainder of 2021 after impressing in the Spanish championship which he dovetailed with a WorldSSP campaign. Championship contender Steven Odendaal (Evan Bros. WorldSSP Yamaha Team) will line up 13th and will need to fight his way through the field as he looks to prevent Aegerter from extending his Championship lead. 2019 Champion Randy Krummenacher (EAB Racing Team) also has a lot of work to do as he could only manage 19th on the grid.