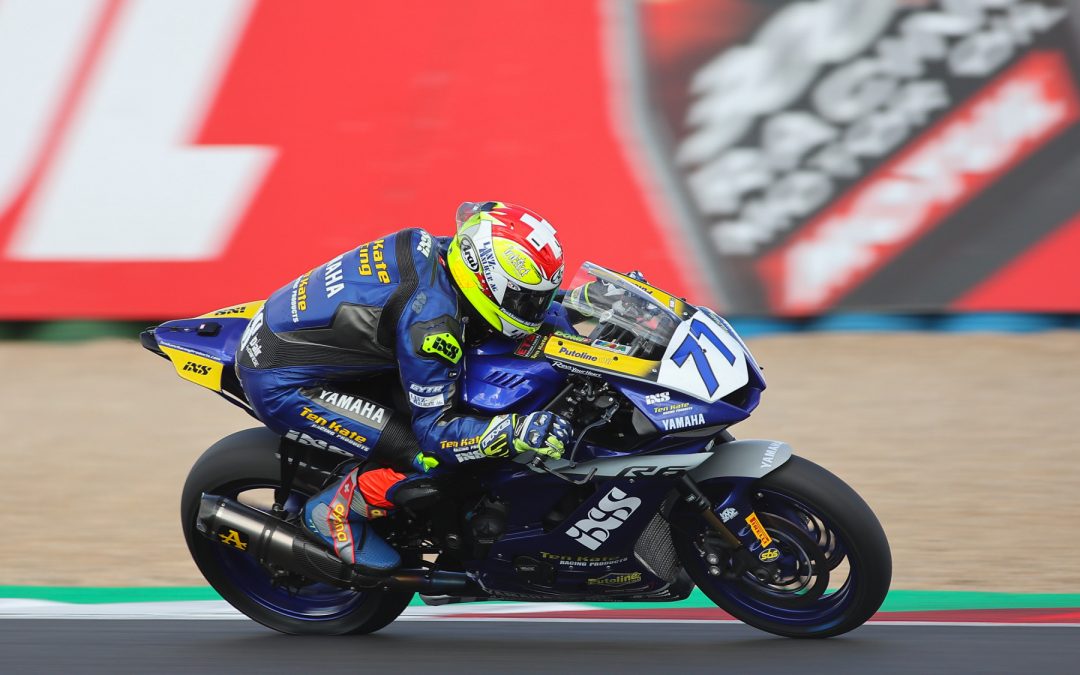 The 2021 FIM Supersport World Championship’s first day of action has ended at the Motul French Round at the Circuit de Nevers Magny-Cours. After a frantic day and arguably the only class to have consistent track conditions throughout, there was a big accident in the opening stages of the session with Steven Odendaal (Evan Bros. WorldSSP Yamaha Team) and Hikari Okubo (G.A.P. MOTOZOO Racing by Puccetti) going down at Turn 3, with Okubo being taken to the medical centre for a check-up. By the end of the session, it was Dominique Aegerter (Ten Kate Racing Yamaha) on top of the standings, leading for most of the afternoon.

TOP 3: Aegerter at the head of the field

Dominique Aegerter was in fine form throughout the afternoon’s running, with the Swiss bouncing back after losing his time in the opening session of the weekend for a yellow flag infringement. Aegerter kept improving right into the closing stages and had the better of Federico Caricasulo (Biblion Iberica Yamaha Motoxracing), with the Italian up in second after leading the way in FP1. Finding form at a circuit he’s more familiar with. He edged out the youngest ever WorldSSP race winner Andy Verdoïa (GMT94 Yamaha), as he flew the French flag up in third place.

THE FRENCH ARE IN CONTENTION: a perfect homecoming in prospect?

Verdoïa’s teammate Jules Cluzel (GMT94 Yamaha), with the Frenchman in fourth and finding a good rhythm at his home circuit. In fifth place and making it three French riders inside the top five was Valentin Debise (GMT94 Yamaha), with the wildcard going well and giving the home crowd to cheer about. Up in sixth place was Finnish rider Niki Tuuli (MV Agusta Corse Clienti), as he returns to the track he won at back in the 2017 campaign, although he didn’t improve on his time.

BEST OF THE REST: Kawasaki’s in behind

WORTHY MENTIONS: those further down

Notable names outside of the top ten include Manuel Gonzalez (Yamaha ParkinGO Team), who was on a good final lap before losing his time due to exceeding track limits, dropping to 12th, whilst Kevin Manfredi (Altogo Racing Team) was lead WorldSSP Challenge rider in 13th. Randy Krummenacher (EAB Racing Team) was only 14th. Hannes Soomer’s (Kallio Racing) return saw him in 25th, whilst Unai Orradre (Yamaha MS Racing) graduates to WorldSSP for the rest of the year and his first day of action saw him in 26th.

Top six after day one of WorldSSP, full results here: