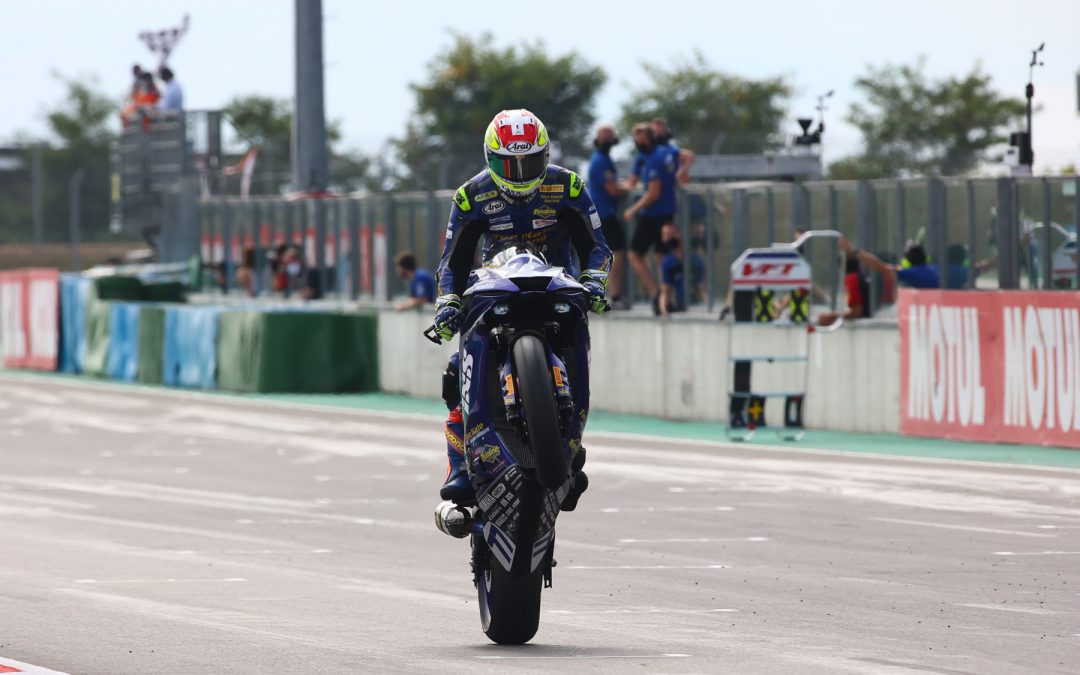 The opening race of the FIM Supersport World Championship was full of drama after a restart caused by a Red Flag shortened the race to 12 laps, with Dominique Aegerter (Ten Kate Racing Yamaha) claiming victory in Race 1 for the Motul French Round at the Circuit de Nevers Mangy-Cours, extending his lead in the Championship to 52 points over nearest rival Steven Odendaal (Evan Bros. WorldSSP Yamaha Team).

The original race of 19 laps was Red Flagged on the opening lap after an incident involving Michel Fabrizio (G.A.P. MOTOZOO Racing by Puccetti), with the Italian coming off his bike before his Kawasaki machine went barrel rolling on the grass. With the amount of damage to his bike, the decision was made to Red Flag the race, with Race 1 restarted after with a 12-lap distance. Fabrizio was taken to the medical centre for check-p following the incident, before being declared unfit with multiple contusions and abrasions. The restarted race also gave Niki Tuuli (MV Agusta Corse Clienti) a second chance after his MV machine suffered a technical issue on the opening lap, but he was able to join the restarted race.

START OF THE RACE AND PODIUM BATTLE

Luca Bernardi (CM Racing) was unable to keep the lead from the start as Championship leader Dominique Aegerter (Ten Kate Racing Yamaha) jumped the Sammarinese rider into Turn 1, with Bernardi falling to fifth before he started to fight his way back through the field. Jules Cluzel (GMT94 Yamaha) had a good start as well as he looked to claim a home victory, applying pressure to Aegerter in the first part of the race

Spanish rider Manuel Gonzalez (Yamaha ParkinGo Team) had an eventful race as he battled for a top four finish with Championship contender Steven Odendaal (Evan Bros. WorldSSP Yamaha Team), with the South African rider battling back after a difficult Tissot Superpole session. Aegerter was able to go on to take his ninth victory of the season but Odendaal was able to claim second place with a Lap 11 move on Cluzel at Turn 5, with French rider Cluzel claiming his fourth podium of 2021 with third.

Gonzalez finished in fourth place as he narrowly missed out on a podium place by just 0.168s ahead of polesitter Bernardi in fifth with the pair separated by just one second. Bernardi was able to maintain a top five finish despite a challenging race, finishing ahead of Federico Caricasulo (Biblion Iberica Yamaha Motoxracing).

There was a battle between the two Kawasaki Puccetti Racing teammates as Philipp Oettl and Cam Öncü fought over seventh place, with Oettl able to finish ahead of his Turkish teammate by just two tenths. Italian rider Raffaele De Rosa (Orelac Racing VerdNatura) was ninth while Andy Verdoïa (GMT94 Yamaha), returning to the Championship, claimed a top-ten finish with tenth.

2019 Champion Randy Krummenacher (EAB Racing Racing) battled back from 19th place to claim 11th place, while Kevin Manfredi (Altogo Racing Team) was 12th as the highest placed WorldSSP Challenge rider. Stephane Frossard (Moto Team Jura Vitesse) was 13th for his highest-placed finished of the 2021 season. Unai Orradre (Yamaha MS Racing) claimed 14th place as he secured points on his WorldSSP debut after moving up from WorldSSP300; both Orradre and Verdoïa have competed in WorldSSP300 and moved up from the class to success in WorldSSP, with Verdoïa the youngest ever race winner in WorldSSP after his win at the Catalunya Round in 2020. Hannes Soomer (Kallio Racing), returning to competition following injury, secured 15th place.

Valentin Debise (GMT94 Yamaha) was unable to take to the restarted race after he had an issue on the Warm-Up Lap, before his bike was collected by Vincent Falcone (TFC Racing) on the grid, with wildcard Falcone also not taking the restarted race; both riders taken to the medical centre for a check-up. Debise was diagnosed with a left wrist radius fracture and declared unfit, while Falcone was declared unfit and transported to Nevers Hospital for further assessment after being diagnosed with a cervical strain and thorax contusion. Galang Hendra Pratama (Ten Kate Racing Yamaha) retired from the race after a crash on Lap 3 at Turn 13, while Tuuli retired after an incident on Lap 8 at the same corner. Vertti Takala (Kallio Racing) was another retirement in the 12-lap race, along with Peter Sebestyen (Evan Bros. WorldSSP Yamaha Team).