A fifth round in the Nièvre which may already be decisive 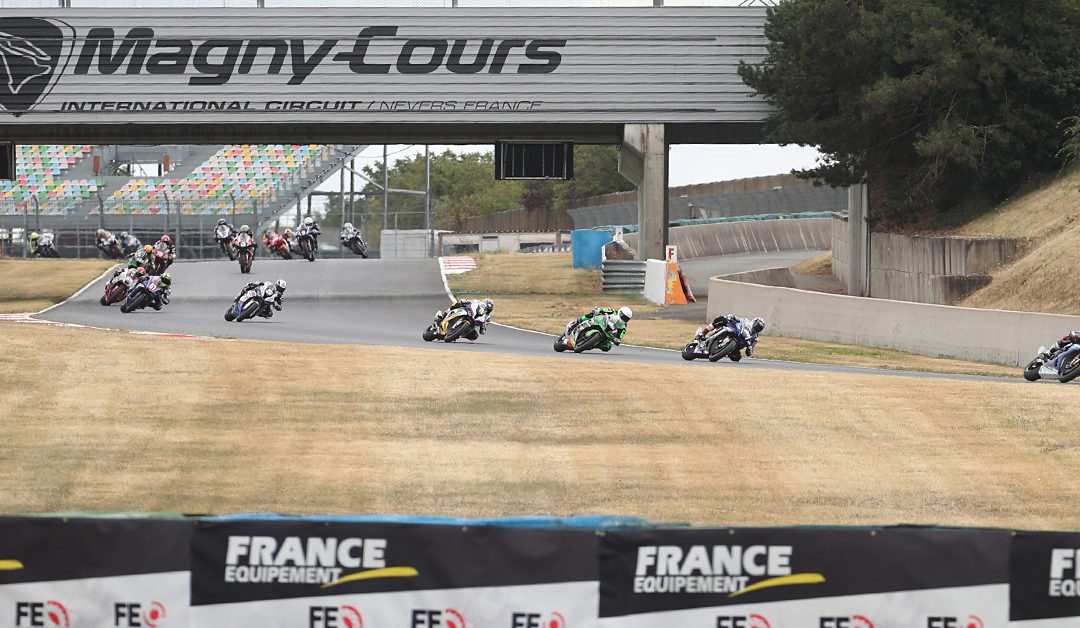 Just back from Béarn, the riders of the French Superbike Championship go to the Circuit de Nevers Magny-Cours, one of the most prestigious of the calendar. For this 5th round of the season, the Moto Club Nevers de la Nièvre, under the aegis of the FFM, welcomes the 200 riders aware that this stage could be a turning point in the race for the title. See you on July 1st, 2nd and 3rd for the rest of this exciting season.

SUPERBIKE: SMALL GAPS AT THE TOP

With two wins but also two retirements in the last four races, Valentin DEBISE (Yamaha – Michelin) seems to have used his jokers. Leader of the championship with 153 points, DEBISE is now in Magny-Cours with only 16 points of advance on his runner-up. Despite the pain caused by his hand injury, Mathieu GINES (Yamaha Tech Solutions – Pirelli) showed a lot of courage at Pau Arnos to stay in contact with his rival. If the Breton rider is back to full fitness, the public of Nivernais should witness a new fight between the two leaders of the queen category.

After a difficult stage in Lédenon, Kenny FORAY (BMW Tecmas – Michelin) has recovered in the last round. The rider of the n°78 BMW Tecmas regained the victory and came back in the title race, only 29 points behind the leader. Victorious last season on the Nevers Magny-Cours track, FORAY will try to repeat this performance to put the pressure on DEBISE and GINES.

This season, Alan TECHER (Honda CBO Racing – Michelin) has found some consistency, with a 5th place as the least good result. On a series of three consecutive podiums, TECHER will try to continue his momentum and could even claim victory on a Circuit where he will make the power of his Honda speak.

With 102 and 94 points, Martin RENAUDIN (Yamaha Moto&GP Addict – Pirelli) and Axel MAURIN (Yamaha CMS – Pirelli) are at the foot of the podium. As since the beginning of the season, the two Yamaha riders will play the spoilsport in the race for the trophy. As well as Valentin SUCHET (Suzuki Junior Team LMS – Pirelli) who will try to break the glass ceiling of the top 5.

David MUSCAT (Ducati – Michelin), Gregory LEBLANC (Ducati TWR – Pirelli) and Guillaume ANTIGA (Ducati – Pirelli) are struggling to get to the front of the standings since the second round. On a circuit characterised by high acceleration and long straights, the three Ducatis in the field could do well.

With eight victories in as many races, RENAUDIN is the leader of the Challenger class ahead of SUCHET. His Suzuki Junior Team LMS teammate, Charles CORTOT (Suzuki Junior Team LMS – Pirelli) has shown great consistency since the beginning of the season and will be fighting for a podium finish in the young rider category. Back on the front of the scene with two good 2nd places in Pau Arnos, can Maximilien BAU (BMW – Michelin) still claim the Challenger podium despite the accumulated delay ? Answer at Magny-Cours on July 3rd.

During the last round, Valentin DEBISE (Yamaha – Michelin) increased his lead by taking his eighth consecutive win. He will be sure to leave Magny-Cours in first position of the championship and will be keen to continue his series to maybe win the grand slam, which escaped him last year.

With seven podiums in eight races, Matthieu GREGORIO (Yamaha – Pirelli) is showing himself to be at the highest level… But the n°153 rider seems untouchable this season. The public can however count on the young rider from Gard to continue to fight for this victory which is close to his heart, until the last meters of each race!

For the 3rd place of the general classification, Loïc ARBEL (Yamaha TWR Junior Team – Pirelli) has taken the lead on his pursuers. The TWR Junior Team rider will have to fight again with GREGORIO and DEBISE as he did in Le Mans and Nogaro.

In the Challenger category, with 100% of victories, Matthieu GREGORIO is the great favourite to succeed his friend Ludovic CAUCHI. To complete the Challenger Top 3, the fight between GIMBERT and AEBI looks interesting. Bartholomé PERRIN (Yamaha – Pirelli), who is progressing very well, could also claim a podium.

Despite a clear domination, Matthias ROSTAGNI (Béon – Bridgestone) did not manage to make the break in the Championship, the fault of some bad luck and haste, especially during the last race. ROSTAGNI remains the great favourite and will be keen to win two races in Magny-Cours.

With only 24 points behind, his runner-up Célestin MASY (Béon – Bridgestone) is still in the game but will have to win at last to hope to compete with the driver of the Béon n°13. It is the same for Quentin GODEFROY (KTM), who is still on a good 2nd place in Pau Arnos. At the foot of the provisional podium, Quentin MANDINE (Béon) and Camil BISSANE (KTM) are probably aiming for the top 3.

HONDA NSF 250 : BERCOT AND CAILLET CLOSER THAN EVER

The duel for the title is well underway between the leader Jules BERCOT (Honda NSF – Bridgestone) and his runner-up Benjamin CAILLET (Honda NSF – Bridgestone). If BERCOT has only two victories against four for CAILLET, the latter has to pay the price of a contrasted weekend at Lédenon with a missed start and a withdrawal. For BERCOT, regularity pays off with seven podiums in as many races. At Magny-Cours, the public can expect a great battle between these two boys separated by only 6 points in the provisional ranking.

With 100 points, Lorenzo GUYAU (Honda NSF – Bridgestone) is the main outsider of the category. Will he be able to challenge the two favourites?

SUPERSPORT 300: DAHMANI NOT YET SAFE

Since the beginning of the season, Enzo DAHMANI (Yamaha – Pirelli) has been on a pace that closely resembles that of a future champion. Often able to play for victory, he also knows how to secure the big points in the more difficult periods. A strategy that allows Enzo DAHMANI to have a 38-point lead over his runner-up.

2nd and 3rd, Dorian JOULIN (Yamaha – Pirelli) and Louca FRIEH (Yamaha – Pirelli) know that nothing is decided for the title in spite of the good lead of the rider of the Yamaha n°13. Indeed in Supersport 300, the races are extremely competitive and the slightest mistake can make the riders who are fighting at the front lose up to five places. They will take their chance if the opportunity to win arises again.

Tied and only 12 points from the podium, Evann PLAINDOUX (Yamaha – Pirelli) and David DA COSTA (Yamaha – Pirelli), already winners this season, will do everything to reduce the gap with the three leading riders.

The situation in the F600 Championship has tightened again at Pau Arnos and from now on every point scored will be decisive in the race for the title. At the head of the field, the PERILLAT / KOTCHAN team will continue its efforts against the two teams with a long history in the FSBK-FE, LE BAIL / LEVEAU, 2nd, and PEUGEOT / PEUGEOT, 3rd and back after good performances in the World Championship. A great three-way match is to be expected between the best current crews.

In F2, since the start of the season, the three teams PALACOEUR / CESCUTTI, BLERVAQUE / AMETTE and MOREL / MOREL share the big points. Who of them will leave the Nièvre at the head of the chassis-courts ranking?

Note that the field will welcome ROSCHER / BURKHARD, a prestigious team with an eloquent international record.

For this 2022 season, the FFM will broadcast a video of the best moments of the day on the official FSBK-FE Facebook page and the fsbk.fr website.

ONLINE TICKETS
© Circuit de Nevers Magny-Cours 2016 - Création : agence itiConseil
We use cookies on our website to provide you with the most relevant experience by remembering your preferences and repeating your visits. By clicking on "Accept all", you consent to the use of ALL cookies. However, you can visit “Cookie Settings” to provide controlled consent.
Cookie settingsAccept
Manage consent